May 9, 2011
Ed Mac, Jack Savidge and Edd Gibson have done it again.
Get ‘Pala’ the new album here: http://amzn.to/friendlypala
http://www.wearefriendlyfires.com 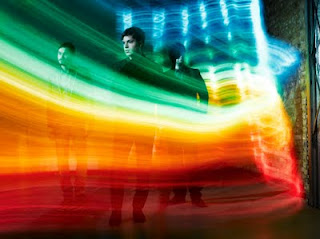 To date St. Albans trio Friendly Fires; consisting of Ed Macfarlane, Jack Savidge and Edd Gibson, have released 3 EPs. Each grounding their career in 2006’s Photobooth, followed by 2007’s Cross The Line EP containing the infamous anthem track “On Board” and the remix EP holding onto a new territory for the three. In September of 2008 Friendly Fires released their debut S/T album on XL Recordings. As their talent together grew and took them to bigger places,  their support grew too. With a respectable press/media backing the band ended up with a nomination to 2009’s Mercury Music Prize and even gathered nominations for the following years BRIT awards. Despite such a solid reputation and constant high quality deliverance, the boys truly worked the scene until taking time to get back to their roots and get ready to return with a masterpiece ready to impress all.
The wait for that next release has felt like a lifetime to those with the debut still constantly being played. And granted the process took longer than expected due to using studios across the UK and North America, but this is the month an album will withstand the competition, the season the release coincides with and triumph to the credit the 3 hard working men deserve. The release of their sophomore studio album “Pala”.

The upbeat fresh electronic/euphoric band admitted to being in hiding in the studio in order to create their second effort.
The album takes its name after being inspired by a 1962 novel written by the English author Aldous Huxley’s titled “Island. Both Paul Epworth (Florence and the Machine, Adele) and Friendly Fires produced the album which was recorded in just over 12 months.
Singer and hip shaker Ed Macfarlane previously revealed that he was working all day and into the night he ended up with cabin fever, but had never been so focused in getting the songs written. Amongst many rumours of collaborations on the record it is confirmed and present that Holy Ghost!’s Alex Frankel provides guest vocals on single “True Love”.

The 11 Track album is stated to be heavily influenced by 1980s/1990s Chart Music and regardless of influences present, without a doubt throughout each of the 11 tracks, their work highlights the natural progression of maturity this band has established. Shown throughout their musical development and lyrical evolvement.

The first single they released “Live Those Days Tonight” proceeds the predominantly percussion based euphoric expedition that is Pala. A heavily layered track of walloping piano chords, vibrant synth surges, concentrated layers of percussion, elongated echoes and repetitions combined with an underlay of tweaking and compassionate electronics’ throughout. Half way through a breakdown provides handclaps to bring the track gradually back as one main hype and in doing so providing a head moving composition. The track repeats the “Live Those Days Tonight” lyrics until the finale.
“Blue Cassette” follows with a slower progression enhanced with a reverberated beginning and real tape machine sound effects, that tame betterment is suddenly pelted into full deep sounding swing when the intense drums forcefully belt their way into the chorus alongside an epic swirl of electronic compulsion. A tuneful structure is accompanied with repetitive yet compelling vocals which offer chantable and mesmerizing lyrical enforcement. A track that can easily connect with their audience and an instant classic. Again this track offers a sincere warmth with the remarkable sound layering built up throughout.
“Running Away” freshens the atmospheric taste built up in the previous tracks; by providing glistening elements within the deep sonic textures. Fruity bass notes assist the structure which is aided with the hypnotic trance-like rhythmic vocals. Simultaneously triggered sound bites and samples boost that dense arrangement. The track also boasts several electronic drum beat break downs/fills although at times do resemble the notorious Phil Collins drum fill.
Alongside Blue Cassette and Live Those Days the band have also previewed the 4th track on the album “Hawaiian Air” as a download before the album release date. This track provides pulsating beats, throbbing electronic sequence played throughout fused with shoe gaze riffs and a richer exotic sentiment.
“Hurting” carries a very blissful groove which sees its way to title track “Pala”, a more sophisticated composition on the album. A much slower downbeat voyage, but compact with the most 80s severe synth sounds going, and this elates the atmospheric presence on a surprisingly chilling single.
A stand out track on the album which highlights an area the band can throw themselves in confidently is the math party rock riffs used throughout “Pull Me Back To Earth” adding a whole new touch to the album so far in, still maintaining that level of captivation. The track also prides itself on the shimmering effects.

Overall each 11 tracks have established how to provide such a fuller and richer arrangement throughout, due to their abilities to conjure such a heavily layered sound texture. Polyrhythm’s, buyout bass beats and carnival percussion; and in vast quantities, provide that euphoric ambience they have distinguished as their own. Oozing in ever lasting melody and vibrancy.

It’s a festival band with a festival following and a festival catalogue, and this album is respectfully the quintessential summer album, but what Friendly Fires have achieved with this release, is not only is it all the above, its also a lot more. Its an intelligent record on their behalf that will overcome the dated summer period when that’s passed. It’s lasting, just like their S/T album. And despite with a Mid May release date and just over 40minutes of upbeat carnival-celebration captivating energetic material which will guarantee to soundtrack the summer months, the fact the trio have explored deeper areas whilst keeping and working on the qualities that work so well for them; this can promise the release wont fade out alongside the season its connected too.

You May Die In The Desert – International Waters (Live) [Video]