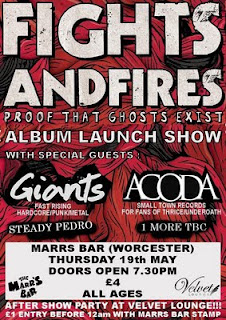 We last featured Fights and Fires, regarding their single exclusive stream and at the time March tour dates, refresh  here.
Fights and Fires have to be without a doubt one of the most hard working bands around. Forever doing what they love and performing live in unpronouncable places afar.
A huge and excitable time for the lads as their forthcoming album “Proof That Ghosts Exist” is on the brink of its release date; and what better way to celebrate the release of their pushing ways and combined intensive traits than their official album release launch night.
Taking place- Thursday 19th May
The Marrs Bar, Worcester
£4 on the door
A night of Punk Rock and Hardcore.
Fights And Fires are releasing their new album ‘Proof That Ghosts Exist’ On Monday 16th May.
This show is the launch of the album and we have pieced a bill together of friends and amazing bands to make the night as fun and as entertaining as possible!
AFTER SHOW PARTY AT STATE OF INDIEPENDENCE @ VELVET LOUNGE!
£1 ENTRY BEFORE 12am WITH MARRS BAR STAMP!
FIGHTS AND FIRES
Lockjaw Records
http://www.facebook.com/fightsandfires
Check out the event page HERE to keep closer to the countdown of the launch and who else you can witness live.
FIGHTS AND FIRES from Worcester UK have built up a reputation for being one of the most hardworking Punkrock/Hardcore bands on the scene. Since the release of ‘Will It Be My Curse’ on Lockjaw Records in Spring 2009 the band have been on the road as much as possible. Throughout 2010, Fights And Fires spent a total of 2 months on tour in mainland Europe alone. Combined with several UK tours, 2010 has been an extremely hectic year for the band. Keeping DIY at their heart and having a good time is what keeps the band going.
Fights And Fires are currently playlisted on Scuzz TV in the UK with a video for the song ‘Smoke And Mirrors’.
2011 looks set to be the busiest year yet for the band, with the release of the full length album due for early spring and a touring schedule already starting to fill up in support for it.
With all the hardwork that comes with touring, the band have refined their show and it is definitely a spectacle not to be missed.
We will keep you posted regarding the new album.
Check out their respectful reviews in the links at the bottom-
Punktastic Review 4/5
Clink music Review 7.5/10
Don’t forget the album is still available to preorder at F+F’s website – http://www.fightsandfires.co.uk/