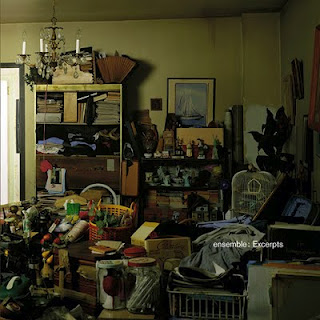 French born Montreal based songwriter/composer Olivier Alary is the intellect and driving force behind Ensemble. Ensemble has evolved from Alary’s musical persona since 1998, where it began as a platform to explore the meeting point between melodic noise and disjointed pop. Alary’s reputation in the industry has seen his concepts collaborated with the likes of Cat Power, Lou Barlow and Bjork.
Ensemble have returned to the scene with their follow up to the 2005 self titled effort. “Excerpts” is the name of both the pleasant new full-length record and also the name of the second single to be taken from the album. Both the album and single have been released in late January on notorious label Fatcat Records, where it is believed Olivier was one of the first ever acts for the label. Olivier’s debut album ‘Sketch Proposals‘ was released by Rephlex Records in 2000. But by 2006, Ensemble had re-established their ties to FatCat. These ties still proving strong and cove table for both joined forces.

Alluring Orchestration, absorbing pop, indie roots, experimental sound waves cultivate the title track “Excerpts” into a single which compliments the album in its entirety, its maturity and the dynamics, all of which present throughout the record is on full display in this single release.

The single “Excerpts” begins with a short build up of atmospheric feedback silenced out with a timid brushing drum beat and a picked string arrangement. 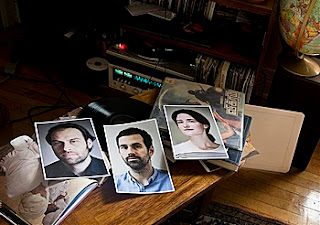 Alary’s long-term collaborator Darcy Conroy is present, providing velvety vocals for a breathy, expressive counterpoint to the skipping strings. Pizzicato strings dart around the ears, while sheering noise waves occasionally push the dynamics to breathtaking peaks. The atmospheric and sophisticated vocals on the record compliment the ongoing strings/ tremolo. As the track progresses the beat moves on from that gentle brushing to deep beats, not too heavy, still remaining in keeping with the track but providing that more heavy and demanding drive. The string arrangements’ increase in aggression which soon changes the atmospheric direction of the track. Half way through “Excerpts” the tempo shift unites all instruments into the breezy chorus. Certain orchestration notes played mid flow of this journey, instigates more edge/tension into the track and the story within the track. In its entirety this single is easy listening, something that could be playing in the background on a radio sound tracking a blissfully chilling summers day. Despite dark elements to some of the sounds, it is solely a gentle composition. The track itself does seem to come to an abrupt end, this however could be down to the easy flow lulling the senses in and then suddenly its a need to hit replay, despite being an average length track.

A collaboration with the critically acclaimed French singer Dominique A, ‘Norilsk’ backs this single. Its drifting, choral squeaks and squeals back Dominique’s delectable vocals. Both tracks alongside the album was recorded entirely using physical, acoustic instruments and objects, this in tow reflects the vivacious emotion presented. It was committed to tape in Montreal (which is, like the record, bilingual) and mixed in upstate New York and Berlin with collaborator/arranger, the award-winning film/theatre composer Johannes Malfatti.

It’s not a stand out effort, but its mature and highlights what creativity can be done to distinguish a track from being elevator music. It holds a certain charm and provides a gracious journey. To put it simply; easy listening with a sophisticated notoriety.

Streaming Here amongst other places- http://hangout.altsounds.com/reviews/129079-ensemble-excerpts-single.html

Listen to all ASIWYFA releases.