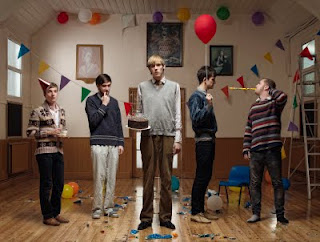 If you are unfamiliar with this UK talent, then this will be an introduction to a band who will withstand time and the ever-changing industry to continue to grow and develop. Their audience will also guarantee to increase as they progress to release such heartfelt efforts. This band provide an instant compelling listen.

To date the band have released a self titled EP in 2009, followed by a mini album in March of 2010 titled “Pull Us Apart”. The success of this led to another direction for the band as the 5 released a free 14 minute concept record, “The First of Many Dreams about Monsters” can be found here. Described as “ A twisting behemoth of a track” by NME this inventive approach bought a new found confidence to the band. Earlier this year Spring Offensive released an acoustic EP titled “Between Me and You.” This was only available for a week after being Recorded during a wintery session on the Isle of White in freezing January. In a twist of respectful promotion those who bought the EP, paid for the first single of the year to be released as an 8 page colouring book, with crayons. That single “ A stutter and a Start” was released this month and again provided a further strength for the band.

Following the release of this single, we spoke to the band to find out more about that direction, influences, story behind the release, live performances and more.

Firstly Thank you so much for taking time to be apart of Circuit Sweet. I was introduced to you not so long ago but needed to spread the word of you guys and hopefully this interview will help some more.

We were lucky enough to speak to Matt although contribution from all members.
I can only answer for myself here (Matt). I had no interest in music at all really until I was about 11 or 12. Well, I did, but it consisted of playing the clarinet and listening to Phil Collins. I started to teach myself guitar because I saw that the cooler kids knew how to play one, and when I started writing songs, the guitar was what was always to hand. Everyone else in the band is far better at their instruments. I am totally outclassed. But then again I have no real interest in guitar. If there is an instrument knocking around I tend to try and play it or write with it, but guitars just seem to always be readily available. I love writing music so much, I don’t really care what I do it with.

Lucas got me into proper music. I owe that to him. He threw my record collection out of my window and replaced Alanis Morisette with Elliot Smith. When I started listening to music like that, with more intensity and passion behind it, my song writing changed completely.
Rather predictably, we all met at school and formed a band. I think the word ‘band’ might be misused here actually. It was more like a gentleman’s club. Eventually the 9 members of the band slowly parted ways during university etc and we are what’s left. I would say, despite our long long history, we have been together for about 2 years. When Tom Robinson first played us on BBC6Music in 2009, it was the first time anyone had paid us any attention. Rightly so..we were shit.
Spring Offensive is a poem by Wilfred Owen.
We are still working those out. We want to make music that is accessible but in no way generic. I guess..I did only think of that just then. We are not particularly ideological. There are things we would like to do and change within the industry, but in our position it is fairly pointless to even entertain the thought. What pisses us all off so much is that blandness and success can frequently go hand in hand; the more success a band has, the less interesting what they do seems to become (this is not always the case: R*******D being a recent example whose ambition has expanded at a rate equal to their success). But every band should be doing that: using a fanbase or a label as a platform to experiment from. Using that privileged position to some of its potential.
I don’t know. Perhaps if I am every in that position I might change my mind and by a fleet of Cadillacs instead.
The National. iLiKETRAiNS. Low. Death Cab for Cutie. Menomena. Wild Beasts. Joan of Arc. Nick Cave. Bon Iver.
We like to tell stories.
Heaps of drugs about 10 minutes before stage time.
Matt: Loop pedal. Boss D-somethingarather. Means I can make creepy drones and noises.
Lucas: Tambourine.
Joe: Bass strings.

Theo: A tuning pedal. Before we got them we would tune up at the start of the set, maybe tweak a little bit of the way through, but generally leave it to chance, which is just totally insane in retrospect. Also, this may be revisionist history, but I think we can date when our music became slightly more palatable from when we got tuners…
Pelham: For me it’s drum cases. Skins last for longer, loading in and out is easier, you can stack them on each other and stack other things on top of them, use them as risers for amps when needed. As mundane as it sounds, I find the practical additions are always more useful than the creative ones.
Yes. The songs usually start with me. Sometimes an idea, or sometimes a fully-fledged acoustic track, but generally they get mashed around and torn to shreds in the studio. Its how I like it. Lucas writes a lot of the lyrics too, and we are as brutal with each other’s words as we are with our own.
Of course. Or we wouldn’t have released it! You can always say more, or think ‘I could have said that better’, however it is a bit of a dangerous road to go down. You start shaping songs into something that they are not.
It doesn’t always follow as a natural progression. A sound can go on a tangent rather than always developing. I think it has matured though. The more we work together the better we get. We can pretty much read each other’s minds. Theo has always been able to read minds. Ever since he was a child.

Like anyone in the world in any job, you can have bad patches. People tend to forget that. And you can have moments of self-doubt that can shape a release, be it the lyrics or the music. It is not that this is one, it is just important to remember. The music always comes from a very human place so it is subject to ups and downs/ebbs and flows and that can be reflected in a release. It is not always a logical, always improving progression.
To make loads of money and eventually buy our own island w/ on suite recording studio
Every time we record it has been different. With Monsters we recorded it all live, in the same room, and used one continuous take, but the process with Stutter was a bit more studio-ey. We try and do as much live as possible to keep an edge to it but there were far more overdubs. The song required it though; it is kind of a bit more mathy and spiky (horrible bland words grrrr). We recorded it at Middle Farm Studios down in Devon, at Peter Miles’ place. Just an incredible studio! Complete with a wonderfully kind family to look after you and cook your food. Being comfortable in the studio is a must! 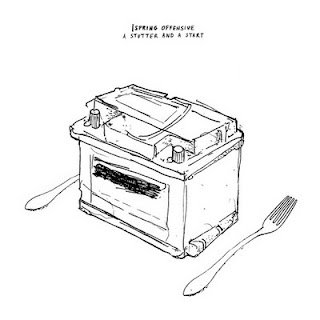 Amazingly heartening. Positive reviews and mostly packed out gigs. The physical copies (which was a colouring book and CD that came with colouring pencils) have nearly sold out, and people seemed to love them. It is hard to tell at this early stage. When you are self releasing, it is much harder to make an instantly impressive splash: a release has to gather momentum (with Monsters it took NME three weeks to pick up on it).
The idea was 100% ours. No one else has any input into it, other than Dave (Runaway) himself and a few friends that helped out. That is the beauty of being D.I.Y. You get to collaborate with other creative-types and have fun. No body can tell you to do otherwise. This means that you have to trust yourself, because in the same way there is no one to tell you the idea is shit, there is also no one to tell you that it isn’t!
We will continue to be D.I.Y until we sign. We are not D.I.Y through choice, any more than the right opportunity hasn’t come along at the right time for us. We don’t want to rush it. D.I.Y is how you learn. From little things about to work with promoters, to the much bigger projects like making a music video.

It is hard work, but a lot of fucking fun piling into the van and doing what we like. If a band can possibly (even at a stretch) be D.I.Y then they should.
They asked us. Oxford is a small town.
No one really compares us to them really. Maybe if you have a major/minor/major/minor chord sequence people make the comparison. If they do, I personally feel its lazy journalism. We wear our influences on our sleeves, and Radiohead isn’t one of the big players! We got called Foals fanboys the other day though..
I hope that it always was. In fact, if anything, it is keeping it natural that is the challenge. The more you gig and the more you write the harder it gets, purely because of the repetition element. You have to keep it fresh. You have to find ways to keep the songs personal to you. Well, to be brutal.you have to find ways of making the emotion seem real: you don’t have to feel it, you just have to make others believe that you do. That doesn’t mean that you don’t, but it is important to remember as it can alleviate some of the pressure.

If you pick something to write about that has no grounding or relevance to any of our lives it is going to be very hard to write about. However, pick something that is pertinent and we don’t have to look to far and the emotion will come through naturally. Then tempering that emotion, rather than summoning it is the challenge!

The First of Many Dreams about Monsters. Perhaps we have written better songs, but in terms of its importance to us it is likely to go unrivalled. We spent more time on it than we did the mini album probably. It was a long and painful writing process but brought us closer together as a band. Lyrically and musically I think it was everything that we wanted it to be. For that reason we are fiercely proud of it.

The National- High Violet. Long may it stay there.
Plenty of shows around the country, and heaps of new songs. Maybe an albums worth by the end of the year. Who knows? If you are an American reader Pull us Apart is being released on Burning Buildings Records in June. Apart from those, I wouldn’t like to say.
We here at Circuit Sweet wish the lads all the success with their current Single and all future endevours which we will of course follow and feature.
For now you can find out more by getting connected with Spring Offensive HERE.