April 27, 2011
Gallops although featured on a Japan Tsunami Relief COMPILATION at the end of march were really last mentioned following the release of their 2010 5 track EP back in August of last year, to refresh your memory and download a free track from that EP just click here.
Since then however, this instrumental four piece band hailing from Wrexham have racked up numerous gigs/ festival slots, publicity has grown alongside the plays and their fanbase. As mentioned Gallops composition’s offer a very Battles’ esque influential feel, with hints of Don Cab and a musical resemblance to their fellow label mates Three Trapped Tigers, Gallops are back again with limited edition 7″.
Their latest effort is now available to preorder on Blood and Biscuits HERE. Official Release Date 23/5/2011
Tracklisting:
A: Joust
AA: Eukodol 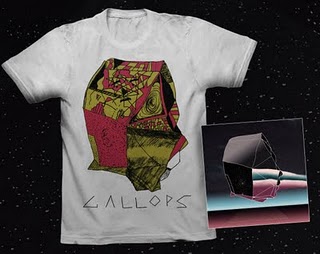 Smashing together elements of live electronics, muscular guitars, synthesised oddities and math-rock all underpinned by mesmeric live drums.
The artwork was done by Paul from the band and the 7″ is available as part of a bundle with an Exclusive t-shirt inspired by the (well prog) cover art!
You can listen to both tracks; streaming below.
Gallops – Joust/Eukodol by bloodandbiscuits