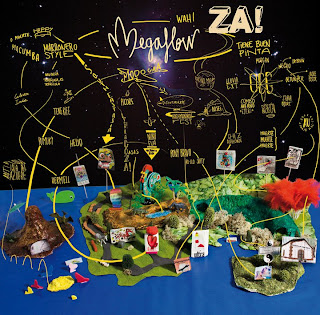 Nearly a year ago I had the honour of encountering the phenomenal sounds of ZA! When Aulos shared a stage with the duo in Camden’s Tommy Flynns. Pictures and in depth review can be revisited here.
But fast-forward a fair few months and ZA! consisting of  Papa Dupau (guitar, trumpet, kalimba, percussion, voice) and Spazzfrica Ehd (drums, keyboards, drum machine, clarinet, voice) are celebrating a greater release on their part and once again embarking on a world tour.
They’ve had the immense chance to play this years already notorious SXSW festival, in the next few days their vinyl is released in Germany and then its all go. A string of dates leading to the summer festivities, the duo plan to play Fusion Festival in Germany, Gwen Festival in Switzerland, Berlin shows then a line of home country shows in Spain such as playing Murcio and Zaragoza.

And what can be said about their sounds a year on? More experimental. More mature. More captivating.

Their latest release Megaflow parades their talent submersing the duo’s record with the 9 instruments played over the course of the 46minute directional changing record. Covering a wide range of experimental noize, note shifts and rhythms.

ZA! – that means countless shows on the highest energetic level, including international festivals (SXSW, Primavera Sound, Sonar Festival), art performances, tours in UK, USA, Spain, Portugal and Germany. They played with noisebands (Lightning Bolt, ZU, Yellow Swans), rockbands (El Guincho, Delorean, Agent Robbons, Mark Eitzel) or freejazz artists (Peter Brötzmann, Paal Nilssen Love), because they love sharing stages with other musicians and creating new music altogether. PAPA DUPAU and SPAZZFRICA EHD have performed improvised and unique shows along with DAMO SUZUKI (Can), Angel Deradoorian (DIRTY PROJECTORS), Les Aus or Nisei. When the audience didn’t stare stunned at the stage or had their faces clenched in joy, they just danced. Live the ZA!-protagonists are connected through their music, they become one body. The physical is neither surface nor underground – it is scope, structure and instrument. A perfect balance between control of gestures and uncontrolled emotions.
The two Catalans have released two albums so far – their last genre blending record “Macumba o Muerte” (Acuarela) was rated as one of the best albums of the century by ROCKDELUX, the main Spanish indie magazine, and was awarded by the “Spanish Independent Label Union”. ZA!’s third album MEGAFLOW will be released by DISCORPORATE RECORDS, Acuarela and Gandula.

MEGAFLOW, that is subnormal energy on two vinyls with amazing artwork (each song has a miniature landscape as a map). A whirlwind of colors. Virtuosic euphoria. Living intuition. Musical explosion. Coltrane, Africa, Asia, Fugazi, Tortoise, Ruins, Stravinsky, Battles… or in this weird package just ZA!

You can listen to a few tracks from this release streaming via their bandcamp below, which links you to details on how to purchase their LP from 25th March.

Watch the track Nanavividedeñaña taken from their latest release Megaflow.
ZA! – Nanavividedeñaña from Natxo Medina on Vimeo.
Look this duo up on spotify or alternatively stay closer to them here.

Look Mexico – Runnin’ Ain’t Freedom (You Should Know That)