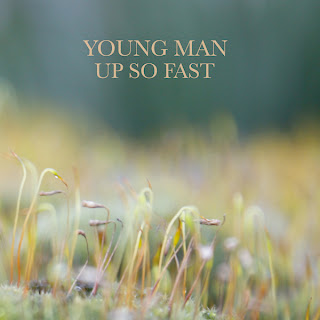 Young Man is the solo project of singer Colin Caulfield whose name is most recognized from his initial starting success posting covers on youtube which bought him a domineering fan base. Colin’s covers attracted respectable success but it wasn’t until he poured his efforts onto original releases which proved a flair.

Although a solo effort, live Colin is joined by a full backing band consisting of Dylan Andrews, Joe Bailey and Emmet Conway. They’ve recently finished a few London shows and are now across seas in Paris where they are supporting ever-growing successful The Vaccines. The constant live appearances consist with his latest March Release, through French Kiss Records in North America, Kitchen Records in Europe and Chess Club Records in the UK, Colin has just released his single “Up So Fast” which also includes a B side titled “Strangers“.

“Up So Fast” is acoustic dream pop at its best. A Perfect fit for the summery/uplifting atmosphere present at the moment. Lyrically the track exploit’s the nature of growing up too fast, this is backed with over 4 minutes of breezy guitars and repetitive instrumentation. Gentle swooning starts the single off; lulling you into this charismatic journey with Colin’s delicate vocals- compared to that of Grizzly Bear’s front man Ed Droste- these amplified with consistent wistful chords and a strong use of repetitive lyrics.  The single develops when a precipitated drum beat/loop rolls in, 2 minutes 48 seconds into this blissful effort, the track then supplies shimmering effects which digress’ the track into a more pulsating and heartfelt excursion. The single in its entirety is gentle, thought provoking, charming and highlights the sincerity of Colin’s tenderness within his harmonious melodies.

The single is the first to be taken from Young Man’s debut EP titled “Boy”  out now on the records listed above.

You can become a fan and keep closer to this release and the boys current workload HERE.
Review also featured here- http://hangout.altsounds.com/reviews/127280-young-man-up-so-fast-single.html