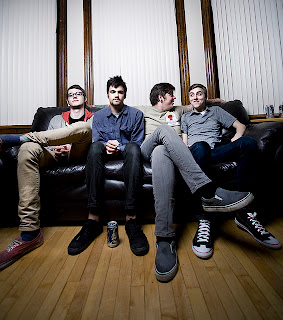 Grown ups are a 4 piece pop punk band infused with an emo essence hailing from Michigan city/ Chicago. The band are completely submersed into a very powerful mixture of opinions, fans and support. Although signed to a personal favourite label; Topshelf Records a fast growing label based in Massachusetts, Grown Ups have recently released their début album More Songs, although, this was also released through UK label Big Scary Monsters.

Grown Ups début follows on from their last EP release titled The Songs back in 2009, 4 tracks of which can be found within their latest album release. Those 4 tracks have been re-recorded to blend in with the warmth of the other 6 tracks, thanks to the help of producer Matt Allison who has worked with such bands as Alkaline Trio and Less than Jake.

This ten track album More Songs should be listened to with an open mind, it opens up immediately with “Weed Science” which flows with fruity fast riffs and somewhat loose bass beats into their second track “Johnny Edwards“. This band are continuously compared to that of label mates Castevet, but it’s their second track which strikes up similarities. Even if you’re not a punk fan, and struggle with the punchy vocals which can be found throughout, musically and creatively this a track than can be favoured. 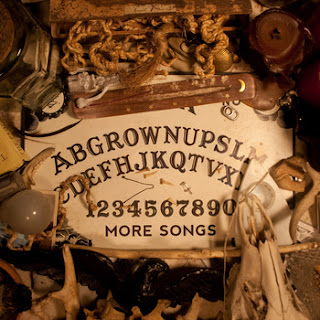 More Songs is steeped in somersaulting guitar lines, deft finger-picking, staccato rhythms and gruff vocals. Throughout each track double guitar is individually panned to the separate ear buds as they scream 90’s Emo. Tracks such as “Six More Weeks of Winter” highlights some true teen angst, infectious riffs and layered vocals bring a more anthemic track. A ferocious blast beat escalates into several extended breakdowns, showing a more serious overhaul for the band. Continuing with this serious side track “Open Sesame” musically just seems a lot more mature, high-hat galore, with a lighter, bouncier feel in the riffs. “Orange Cat” opens with some seriously powerful drums accompanied with incredibly infectious looping, although also displaying a more toned down track, it sounds a lot warmer and inviting than previous tracks leading up to this.

Overall More Songs as a whole could see a lot more potential lyrically. A few lines within the tracks are pure genius – it shows there is a big aptitude for future work. There is a lot of mixed opinions when it comes to the raspy vocals, fused with certain guitar tones that are present throughout the record. More Songs is an album that can easily be picked apart and tarnished, but these guys are in a genre which always comes with a lot of criticism. Regardless, when you listen to More Songs in its entirety, it’s fun, raw, punchy and has some fantastic riffs. Grown Ups are working hard and gaining a strong fan base. They are passionate and energetic and it shines through in their work. For a pop punk fan, this is definitely a record to enjoy. For those who aren’t, it does have the ability with its infectious beats, to become one that will stick around.

Listen to it streaming via their bandcamp here-

Explosions In The Sky- Postcards From 1952