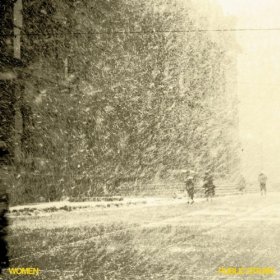 Women are a 4 piece Canadian band consisting of Patrick Flegel vocals/guitar, Matt Flegel bass/vocals, Chris Reimer guitar/vocals, and Michael Wallace on drums. Signed to notorious label Jagjaguwar, renowned for its work with Bon Iver. Women exploded onto the scenes with their first self titled release back in 2008. Fusing many influences to a create a sound which seemed to be a struggle to identify within a genre, Women were described as industrial art rock. Their début release back then seemed to bounce and jump styles within each track.

However they have returned with their second album titled Public Strain and a more promising and strong direction for the band. This 11 track album is a lot more grounded than their previous effort and has certainly captured a band really coming into their own sound, their own craft. Public Strain was recorded alongside producer Chad VanGaalen who produced their self titled record and who seems to only aid in a simply 80’s, indie resemblance. The album begins with opener “Can’t You See” and immediately any Women fan realizes that this is more than a continuation of their début. An emotional, droney, tone setting track accompanied with a ponderous bass line, bowed guitars, moody cello and subtle melodies drowned in reverb kicks this album into place and continues throughout most tracks. A slightly gloomy yet ballad like track begins this musical exploration but this shouldn’t be a put off as the direction swiftly changes upon the second track “Heat Distraction” which provides a more luminous frequent guitar sound, cheerful but slightly repetitive riffs are held together with relentless stylistic time signature twists.

Each track is simply a bulky layering of sound, an extreme distorted electro noise synthesis. Tracks such as “Narrow with the hall” delivers a super 60’s bassline with the Fegal Brothers vocal harmonies providing a cushioned vintage feel to the record. There is a darker vibe towards the end of the record, slower tracks like “The Innocent” still offer that sheer noise intensity which is present in all their work. “China Steps” steps up that eeriness and grittiness their unique distorted sound conjures. Whilst “Bells” takes an instrumental dark ambient approach. Amongst all the tweaks and twists the stand out track happens to be the last listed track “Eyesore” which breaks the built up tension of previous tracks and brings the entire album back to a moving, melodic and sound surprising finish. The track itself has already provided the band with increasing success. Glorious chords, melodic noise chaos, hunting bass beats, diverse drum tempo, energetic chiming riffs. This is the ultimate filthy triumph from the four.

It has been said on first listen that Public Strain can appear to be quite cold on the grounds of the initial hiss and feedback it provides. But re-listen, there is a vibrant warmth that really does shine through. Women have struck their own creative chord and have achieved an album defying labels.

Plastic Estate Release New Single ‘There Must Be More Than This’