February 8, 2011
Back in October we had a little sneak preview into the future Oh No Oh My forthcoming release. The band are about to embark on a European tour in which a few dates I will cover for a live review. However the time for their release has quickly approached and their second full length album “People Problems” is currently making its rounds for reviews and hype… 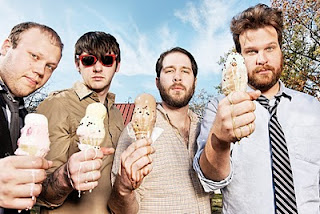 Austin based reputable multi-instrumentalists Oh No Oh My, have, following their last EP release in 2008 recommenced themselves, their name (with a few explanation marks removed) and their sound and have returned back to their perpetual hype with their second full length album release People Problems.
The Texas four piece consists of Daniel Hoxmeier (Guitars, Banjos, Accordions, Keys, Wurlitzer’s, Tambourines, Hand Claps, Percussion, Sampling, Programming), Joel Calvin (Drums, Keys, Hand Claps, Sampler, Tambourines, Bells, Shakers), Greg Barkley (Vocals, Guitars, Bass, Banjos, Accordions, Rhodes, Wurlitzer’s, Keys, Hand Claps, Percussion) and Tim Regan (Keys, Locks, Bolts, Wurlitzer’s, Rhodes, Synth, Guitars, Vocals). Having been producing sheer, sweet pop for some time the band have progressed completely for their latest release in hopes of ditching those “cute” taglines.
A vast change in musical direction has claimed that seeing this new sound through, it’s the bands first official full length release, disregarding their self titled release back in 2006. Their sound which is presented in the newest release propitiously just highlights a much more mature tendency, for Oh No Oh My fans a change can be recognised in the record, it does display a darker feel than previous “cute” innocent pop tracks but the band itself have undeniably grown better and stronger together. In previous releases they’ve managed to capture an innocent charm, something so wistful yet cherishable. The release of People Problems is no different, if anything its more developed, branching out an increasing mature peak for the band. This maturity is their new direction. 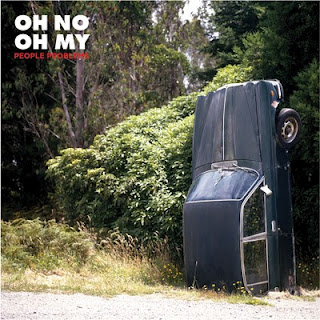 The 12 track album houses darker lyrics and haunting strings. Rhythmic and overall a melodic masterpiece, containing several powerful tracks that instantly establish single success. The vocal harmonies created will in itself uplift the listener.
Tracks such as “ You were right” offer a more serious approach yet still retains an upbeat impression. It immediately begins with an unrefined country rock style riff which progresses and recurs throughout the track, very similar to a 70s rock track. Hoxmeier’s harmonious vocals benefit from an accompaniment of layered vocals, a casing of oohs and ahhs. An extended path of notes, alongside the main riff play out to an electronic break down in the track, its these electronic build ups and break downs, that are present within a few tracks, which highlight a very inventive move for all the musicians, showing their ability to play more aggressively, attacking each another’s collaboration, exposing that serious direction . A hostile last verse  soon softens itself to lead onto the much more tame track “Again Again”. A constant mixture of foot tapping and lullaby like serenades soak this resonate effort.  Despite having such poetic lyrics and vocally offering a very chant-able chorus, the negative aspect to this track has to be the flat drum beat. The track seems a little weaker than the recordings it surrounds on the grounds of having quite quiet percussion seeing as previous tracks provide a heavier outlet.
This is quick adjusted and the quiet percussion is no more with “No time for talk” a full on stomping, summery accomplishment.  Jazzy crusading beats of keys and bass escort the track into several floaty break downs before leading to an excessive instrumental build up 2 minutes in where an underlying acoustic synchronization is spurred with an electronic fusion of harmonious engaging rock. Distorted riffs and a touch of fuzz keep this track assertive, a track guaranteed to move listeners‘.
Another confident outstanding track for the band is “Brains” which was written after a car accident. From something so gruesome, something so tender was created. Simply a hit. Noise intensifying energetic and charmingly effortless.

The album in its entirety covers such a broad ground, with an assortment of lyrical references throughout the albums not lyrically specifically focused on one subject, which is why it branches out and has the ability to shift moods within each track. The album due for physical release via Moelleux Records on 7th March of this year has already gained mixed reactions and criticisms over this new direction. Some see the tracks as being a little dull, the tempo does vary and certain tracks are a lot more slower than previously anticipated for any regular ONOM fan compared to their back catalogue, but this record is from start to finish easy listening, it’s enjoyable and fun. People Problems emphasizes this 5year running band’s creativity and concept. The fact they’ve got to a stage where they can add diversity, where they’ve become comfortable in what they want to play and how to get their thoughts across. It’s still pop, but its deeper and its more compelling. A Charismatic record and one that will supply the success that is deserved.

“You Were Right” by Oh No Oh My by jbleicher
With such an rousing collection of experiences creating the subject matter for the album, understanding the thoughts behind these songs enables us to fully appreciate ‘People Problems’ on an entirely different level. The band have gone one step further with this concept, by creating and updating a website (www.people-problems.com) that showcases both random people and fans they have met whilst on tour who are willing to publically share their own (and often bizarre) ‘people problems’ on camera.
Get more from the band, including this album, merch and tour dates here.
Review also found here- http://hangout.altsounds.com/reviews/125818-oh-no-oh-my-people-problems-album.html