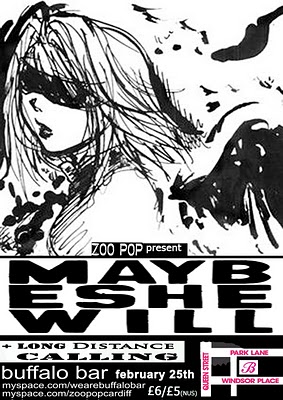 Zoo Pop Presents…
MAYBESHEWILL
LONG DISTANCE CALLING
AULOS
Buffalo Bar
25th February
£6/£5 NUS
7:30pm
Event details HERE.
Tickets are selling fast so be sure to get yours now-TICKETS
AULOS’ first debut public outing of this year after finishing 2010 in a triumphant blazing manor, the band make their return to Cardiff’s Buffalo Bar and this time supporting the unstoppable instrumental hurricane that is Maybeshewill alongside German Post-Rock support band Long Distance Calling.
MAYBESHEWILL is an instrumental post-rock-pop band from Leicestershire, following a steadfastly DIY ethos as they record, mix & master their own records, run a record label, booking agency, recording studio and promote shows in their home town.

They’ve toured with AND SO I WATCH YOU FROM AFAR, CATS AND CATS AND CATS, and supported FOALS, AMUSEMENT PARKS ON FIRE and 65DAYSOFSTATIC.

Love Live Music. Support Your Scene. DO NOT miss out.