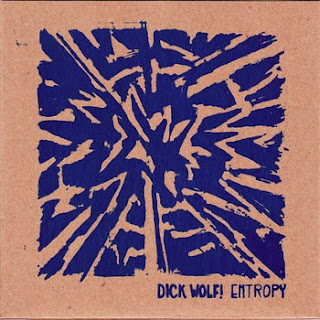 If you failed to get your Dick Wolf in 2010. Then make 2011 the year you do.
Back in May last year we featured the Demo from Chicago’s experimental pop/Math rock fusing trio streaming from their bandcamp.
Introducing an unparalleled blend of math rock and noisy pop to the stage. The duality of the guitars – aggressive, dissonant and complimentary bright and intricate, matched with inviting vocals and explosive drums result in uniquely crafted melodies and shifting time signatures.
Following this feature, in September of last year we reblogged them again, this time offering you the streaming and free download of  DICK WOLF!’s live on-air set on WNUR 89.3 they recorded in July 2010.

The Beginning of this month saw the band return with a 7″ vinyl release titled Entropy. Limited edition of 300 copies get yours whilst they are still available and listen to this record via their bandcamp page below.
Dick Wolf consists of Jeff Kelley- Guitar and Lead Vocals, Kevin Claxton-  Guitar and Vocals and Eric Ridder on Drums.
This band offer accomplished math rock at its best, fused with propitious harmonious experimental pop. Raucous riffs ravish the band’s efforts flirting with buoyant beats and fills creating an overall sound of success.
As efforts are going noticed the band have a string of live US dates which you can check at their website HERE.
Alternatively become a fan on facebook HERE.

Recently recorded, this is a personal favourite track, check out the live footage of My Brother’s Phone is Always Dead thanks to Betta Promotions.