Clay Statues- A town on the edge of the world EP

February 28, 2011
As a regularly featured band on here and one we intend on following on their everlasting journey of  highs Clay Statues return with their latest digital EP release “A town on the edge of the world”. 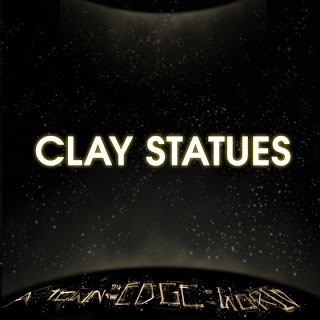 The new EP in its entirety endorses an increasing innovative tendency for the two-some. The record is simply more mature. Its large on all scales- the warping wall of sound created, shimmering tones and effects drizzling this musical parade, established vocals supplementing the brazen blast beats.  These efforts emphasize this united force.

The 3 track EP begins with The Great; which immediately starts with tweaking effects glazing in the phat wall of sound the pair create. Gently guided with consistent pulsating thrashes and humbling feedback.
Innocents digresses into a perfect pop punk track, drowning in an unmistaken charm, melodic, meaningful and chantable.
But stand out track providing that expansion for the duos creativity is title track and last track on the EP’s expedition A town on the edge of the world as it scales more of the dynamic soundscape. Added notions such as trumpets and influential effects aid the heaviness and phat deliverence of this track. Nothing more than harmonious.

We briefly spoke to brash bass badass Dorian Holmes half of the mass sound machine that is Statues to find out a little more on the new release, the recording process, the new maturity and the new plans.

–So firstly where has the inspiration arose for your new EP?

It came from a few things, there were a few ghosts lyrically that I needed to exorcise, age came into it quite a bit also. It was a strange time of wondering if we could write songs as good if not better as those from the first release. But I think these songs on the new EP come from a different place mentally than those on Yay, Volcano.

-Tell us of your writing and recording process for this release..

We started writing just before The Damned tour in August. But due to not being able to do much on tour and taking most of September away from the band, we didn’t finish up the songs until the start of November. The initial session was two days to put down bass, drums and vocals. This was drawn out by me getting ill, which stopped us for near enough to a month. It was finished two days before Xmas.

Recording wise it was all done in Duke Street Studios in Aberdare by Meirion
Townsend (who produced Home on Y,V!) using our exact live set up. Two friends came to help us out, Craig Chapman put down the trumpet line on the title track and David Hill also did some singing.

-What do you want to portray in this ep that can differ to than the previously featured Yay Volcano?

As i said i certainly think that this EP comes from a different place mentally. Lyrically and musically it’s a darker place. It’s also us as a band trying to differ our approach and expanding what we can do.

-How would you describe this release in 5 words?

This should be played loud.

-Last year was a pretty extraordinary one for you guys, touring with the damned alongside a heavy string of live dates, constant buzz, and even respectfully playing through injury, what does this year hold for you?

This year we are just trying to build on the friendships we made last year, play some new places and introduce ourselves to more people. We’re aiming to release something every month, next month we’ll be releasing Vol. 2 in our FREE SHIT series and we’re already starting to plan our first album.

Track listing:
1. The Great
2. Innocents
3. A Town On The Edge Of The World
Recorded in November with Meirion Townsend in his Duke St Studios, Aberdare.
Bass / Vocals – Dorian Holmes
Drums /Backing Vocals – Dorian Adkins
Big thanks to Dai Hill for his backingvocalskills, Craig Chapman for his trumpetskills and Danny Connor for his Artskills.

Be sure to continue to follow the boys journey and efforts by becoming a fan on facebook HERE.