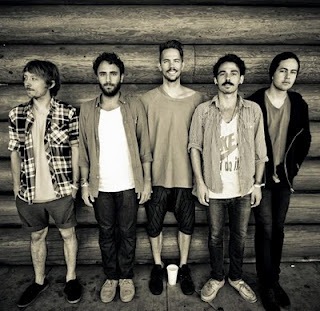 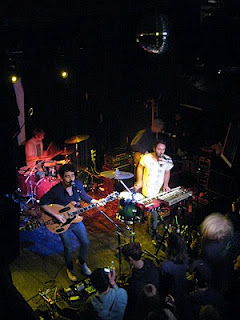 Following their debut album release “Gorilla Manor” that was released first in the UK during November 2009, and later released in their home country of the US which was released in February of this year. In that time the band played nine shows at the 2009 SXSW festival in Austin, Texas. From that they received an incredible amount of attention from the music press. Following their shows they became support band for Edward Sharpe and the Magnetic Zeros, before embarking on one of three European tours and many festival dates.
Their last night in the UK, Local Natives played another sold out show with support from Cloud Control and Superhumanoids.
The “afropop-influenced guitars with hyperactive drumming and hooky three-part harmonies” took to the stage to a very warm cheer and a room full of adoring fans. The first track of their extensive set was “Camera Talk” an enchanting taste of what the night was to hold, the following track “World News” really set the standards for the rest of their set. All five members of the band offer their melodious and gentle vocals which complement one another while performing such addictive tracks. 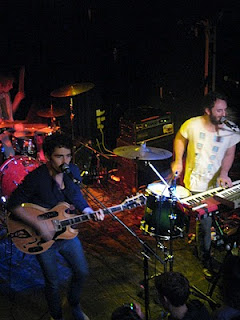 The entire set was so professionally collected; the harmony throughout each track was flawless. Despite some equipment issues mid set, they pulled through giving Bristol a more intimate and special performance of certain tracks.
Their record gained high praise and so should their live performances. A smile was on every single persons face during the entire evening, they truly captivated their audience.  Swapping instruments continuously, pulsating drums and striking guitar riffs provided a complex and addictive act. The harmonies and percussion aided to their fresh and slightly organic sound that only seemed to improve as time progressed.
As their set approached the end, they performed their penultimate single “Who Knows, Who Cares” it was such a gentle, mellow and thought provoking  track comfortably easing the audience into the last song and a much needed atmospheric turn around, as the band played “Sun Hands” with an extended chorus it bought the evening to a euphoric climax.
As the band draw close to the end of a spectacular year for them, they are now heading back into the studio for their 2nd album and will be back next year touring, definitely catch them live they really are something special and a very tight band.