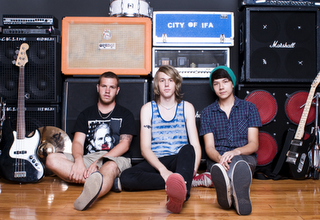 I’ve been a fan of these guys for some time now, but following a new release this month, I feel the need to share these dudes, their work and the fact that at the stage of this release, they are stronger and tighter than ever.
City Of Ifa is a progressive/experimental rock band from Orlando, Florida. Consisting of; Paul Hundeby – Vocals/Guitar. Jake Rodriguez – Drums. Max Starkweather – Bass/Art. Chase Patterson – Singing and Touring Musician(s): Dustin Morris – Bass/Vocals/Guitar.
Sketchy Youth was released November 1st 2010, With thanks to Tim Lemos – Producer/Mixing/Tracking.Paul Hundeby – Tracking and Maxim Starkweather – Album Art.
This album is supporting a new direction, fresher sound for the guys and it really works.
Listen for free below, like it/love it need it buy it and support CoI.
This album is truley captivating, their work together is stronger and this album is showing more maturity and more badass bitchin riffs. Sweet Combo.
Hit up their bandcamp for the rest of their discography, if you are impressed now, their previous work is also very dominant.
They dont tend to use their myspace much so become a fan on fbk Here.

The Cast Of Cheers