Tuesday 23rd November, Birmingham’s popular venue Hare and Hounds opened its doors to Irish Instrumentalists; And So I Watch You From Afar with support from Tubelord and local outfit Butterfly Fan the Inferno.
And So I watch you from afar the Belfast- based instrumental 4 piece signed to small town America records took to the stage to impress a very large audience. The band that have already supported Josh Hommes’ Them Crooked Vultures earlier this year have been touring the UK before embarking on a oversees European tour coming to a close on Christmas eve. From their first opening track the band were boisterous in both noise and moves across the stage. The band immediately hit the audience with a big wall of feedback before slamming into their first track “S is for Salamander” which straight away displayed just how heavy this band can go.
Following the first two tracks the band previewed their new single “Straight Through the Sun” which you hear many label mate influences within, such as Adebisi Shank, but still it remains that brutal sound that is solely theirs.  The track which progresses from a quite upbeat and fun beginning slowly digresses into a powerful assault of elongated riffs and sludgy yet very heavy chords.
It really does take an impressive range for an instrumental band to truly captivate and impression listeners but the technical ability of all 4 lads is just outstanding, their set remained so tight, very melodic, vivacious and energetic. They left everybody sincerely amazed and wanting more. 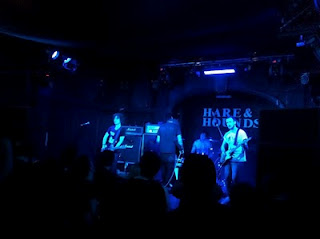 Although their set was heavy and ferocious it did entail more subtle beats and riffs which consisted and was appreciated more during their track “Eat the City, Eat it Whole”. Before leading up to their encore this was the defining track, with tame yet pulsating march-like beats and harmonious overlaying loops created by both guitarists the 7minute track escalated into a euphoric climax for both the musicians and the audience.
As they left the stage with the tantalizing feedback that begun their set, a room filled with approving claps and cheers, a few moments passed before the striking team stepped back upon the stage for their encore.
One of the bands most notorious track “Set guitars to Kill” was drawing the very epic set to a close.  The attacking drum beats, crashing symbols, phat bass line and haunting riffs bought to a beat stopping and very loud finish.
Each track throughout the set was passionately played in such a professional and meaningful way it really was inspiring to be witnessing a hard-working 4-piece.  They know the key to hold an audience and get them all going and it generally was a very amazing gig to have witnessed.
I strongly recommend catching them live, there will be no disappointment.
And So I Watch You From Afar – Straight Through The Sun by Soundsgoodtometoo
ASIWYFA – A Little Bit Of Solidarity Goes A Long Way [Circuit Sweet Media] from Circuit Sweet Media on Vimeo.