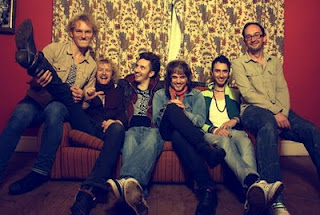 This is the first of a 2 part special for this rad band.
The Peppermint Hunting Lodge are an electro prog band hailing from gloucestershire.
A 6 Piece consisting of: Dan- Vocals, Gore- Guitar, Dave- Guitar, Dobbins- Slapping the Bass, Campo- Keys and Paul- Drums.
Together creating the ultimate superspacenoizefun.
In a matter of weeks TPHL are hibernating into a few dates submerged with equipment, effects, pedals, mics, overdubs you name it.
The guys are checking into Giant Wafer Studios in wales to record their debut EP. Their studio session is to be produced by Tom Woodhead of ¡FORWARD, RUSSIA!
The EP, which as stands should feature 3 newly recorded tracks and possibly a couple of homemade demos. The EP will be released on Itunes.
The guys have previously succesfully recorded tracks in Sawmills studios with Tom Joyce (Oasis/Muse/Razorlight etc). You can check them out by having a complete TPHL session over on their myspace HERE.
Circuit Sweet will be checking back with the guys just after they’ve finished recording to find out all about the new record. So check back shortly for another interview and PT.2 of this bands feature.
In the mean time you can download their new track White Russian for freee below.

Digging the experimental lodge love and wish to see them live. You can catch them at these dates following their studio session-
29th October- The Frog and Fiddle. Cheltenham
30th October- Oaklands. Cinderford
23rd December- The Severn View.Lydney
Picture by Edd Taylor

HALF WAIF shares “In August” from new album, ‘The Caretaker’ out March 27th on ANTI-.