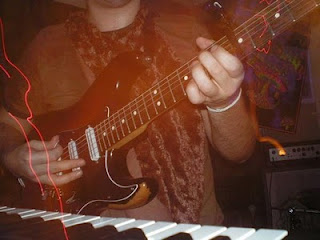 Personally I hate when people think commercially what about passion, love and drive that most commercial (not all) music lacks. Who needs processed perfection when the message is being provided straight up honest and raw.

I discovered Bearcubbin’ a few weeks ago, with similar influences to my favourite bands and sharing the same mathrock, instrumental vibe the Live At The Bear Trap album they offer for free has been something I have felt the need to share with others, if at least one other person digs it as much as I do then I will feel happy this band have blown the head off someone else.

I spoke to Guitarist, Keyboards and Echo-per-plexing Rockstar and bitchin’ Musician Chris Scott, to talk more about the band.

-Where did the band name come from?

The band name is a funny story. I have a friend at work who is gay and he explained to me his type of man as a bear, a larger hairer man. Then he told me about the whole Bear-cub subgenre in the gay scene and I was fascinated by it and the fact that everyone had a name and place and match. The name Bearcubbin’! is a kind of an homage to that scene while at the same time making it fun and playful, almost childlike. Plus the name sounds fun and it is an inside dirty joke between all of us.

-What inspired you all to be in a band and to create music?

Our band was inspired out of necessity. My band, The Jezebel Spirit, had gone on hiatus because our bass player moved to Montana for 8 months and Mike and James’ band, Moses Smell the Roses, had broken up after recording their last album “Please Do Over”. They asked me to play a show with them and we decided to write 30 minutes of new music for it. We worked off a lot of my own loopy ideas and what we wrote became about 50% of the “Live from the Bear Trap” album. The rest came from jams and ideas I had and input from the other members. I came up with the riffs and general structures and they provided the movements and rhythms that makes that album what it is.
The most general answer to why make music question is that we all love it. We are all super creative people and whether it is through visual art, music, or other mediums we need to create. When I play music I look for something that is pleasing and fun, creative and new, and, most importantly, I need something that challenges me and pushes me to be a better player both idea wise and skillwise. We all wanna grow and feel like music, especially math rock music is the best way to do that.

There are so many bands I wanna mention but here are all I can think of as direct influences to our Music:
-Facing New York
-Steely Dan
-Maps & Atlases
-Broken Social Scene
-Sigur Ros
-Tortoise
-Do Make Say Think
-BATTLES (Big One!!!!)
-El Ten Eleven
-Dirty Projectors
-Faraquet
-Tera Melos

– What was the bands approach to recording the Live At The Bear Trap album?

I might as well broach the subject now. Our approach in recording Live from the Bear Trap wa 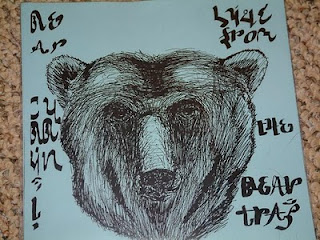 s capturing our music before Mike left for recording and tour with The Smashing Pumpkins. In the midst of us getting into the thick of the band, Mike auditioned and got the job as the new drummer. So priority one was getting his drum tracks done as soon as possible so we could work on the album while he was away. It took us about 2-3 days of live tracking to get all drums down and then James and I went to work on the rest. James pumped out the bass really quick and I spent nearly a week or two putting down all the guitar layers and playing out the loops and adding keyboard parts. I did some experimenting with guitar parts and keyboard parts, but mostly stuck to the structures we set out.

– What is the reaction to your live performances?

– Tell us about your new split soon available, direction, any reservations?

Our new split came at a difficult time in the band. James had decided to leave the band right as we started recording it. So he only plays bass on one song and then I play bass on the other 2. One song was an idea I had for a really long time that ended up finishing right after Live from the Bear trap. The other two were written off ideas between me and mike and as an homage to really great bands that we like that broke up last year…These arms are Snakes, Daughters, and ISIS. Our direction has become a little bit more aggressive and noisey, but still in the same loopying vein. I think this is the most coherent material we have produced. I am worried about the future, because Mike is gone alot and we no longer have a bass player, so playing live and writing new material is really on me and I am really busy working with The Jezebel Spirit to finish a split with our friends Witheyesabstract as well as other soundtrack and personal projects. I am also worried about the release of the split, because the band we were supposed to be putting it out with is comprised of Mike, James, and a guy named Ryan so its same rhythm section on each side and Ryan has been dragging his feet with the release date and getting the thing mastered. I may just have to release it as an EP first and then re-release it as a split when he comes around.

– Hows the music scene where you are based?

The music scene in Portland is bloated. There are so many opportunities for meeting people, playing venues & house shows, and networking that everyone here has become too cool to challenge their musical tastes. There are so many bands here and so much new music happening that everyone has become desensitized to the whole idea of live music and scene support. If it isn’t free and in a cool location with beer and hip people, no one wants to go see it. Its tough being a band on the outside of that whole deal and I really kinda hate Portland for that, but I am truly grateful to have grown up around other guys who have sought out amazing new challenging music and sought to make it for themselves. I am lucky to play in a few bands in the bro fam collective, because everyone in that label is really talented and really a force to make music amazing.

– Tell me about the gear you all use to create YOUR sound..
Gear is kinda all on my end. Mike plays a DW collectors kit and K cymbals. James plays a Fender Jazz Bass with a big Muff PI and a Whammy pedal. I play a Fender Super Bassman through a 4×12 with a American Fender strat. Most of the magic happens on the ground: I use two Boss EQ pedals as boosts before and after the loop station to boost things getting looped, and then the loop itself. I use a TS9 tube screamer for distortion, a Line 6 FM4 for weird sounds, a Line 6 DL4 for delay sounds and short sampled loops, a Boss reverb pedal, and a Digitech Whammy Pedal (I use this like all the time). The main thing that makes the band what it is my use of the Gibson Echoplex. I saw Ian Williams from Battles use one on stage and I fell in lust and I had to have one. That piece of equipment literally makes all the music we make possible. I also play all the keyboard parts through my guitar rig using a Roland Juno G Keyboard.
Im kinda a gear whore.

– What album or track has been stuck on you turntable, ipod, cd player for a while now?
The album I cannot stop listening to right now is California by Mr. Bungle. I don’t know why but I just can’t stop listening to that album. Every track is an amazing exploration in experiemntation within the confines of a musical genre as diverse as surf rock, arabian death metal, Lousiana big band, and do wop. I love the last song on that album “Goodbye Sober Day” because it literally never stops changing and covers everything in like 5 minutes of song. I am also really into the the new metric and the New Maps & Atlases.

– Where do you see yourself and the band a year from now?
I have absolutely no idea. I love the music we make and if Mike continues to have the schedule he has we may only be putting out recordings and performances, very sporadically. We may not do anything else after the split, but I know i want to continue to do music like this and I have always wanted to perform all the instruments on an album so I may try to just do it all myself live. I don’t know.

Get your copy of Live At The Bear Trap FOR FREE HERE..

and if you need more bearcubbin in your life, or simply curious to find out even more then hit up their myspace here.

Here at Circuit Sweet we wish the best for Chris Scott and the Bearcubbin boys and will no doubt be keeping you up to date with the new split and any future projects.